My foray into Macarons - Jen's Kitchen

I have made macaron before, twice in fact.  Once successfully, and once not.  This week a good friend asked would I make them for her daughters birthday party, along with the cake.  I gave an immediate disclaimer that it’s not in my usual repetoire, and that if successful they were hers, if not, well, the family were eating macaron for dinner.  The ones we came across while visiting the Cake and Bake Show in London were truly works of art.

And while we are on it- these are macaron, macaroon are not so finesse in looks.

A bit of History

The macaron cookie was born in Italy, introduced by the chef of Catherine de Medici in 1533 at the time of her marriage to the Duc d’Orleans (who became king of France in 1547 as Henry II). The term “macaron” has the same origin as that the word “macaroni” — both mean “fine dough”.

The first macarons were simple biscuits, made of almond powder, sugar and egg whites. Many towns throughout France have their own prized tale surrounding this delicacy. In Nancy, the granddaughter of Catherine de Medici was supposedly saved from starvation by eating these delicies. In Saint-Jean-de-Luz, the macaron of Chef Adam regaled Louis XIV and Marie-Therese at their wedding celebration in 1660.

Only at the beginning of the 20th century did the Macaron become a “double-decker” affair. Pierre Desfontaines, the grandson of Louis Ernest Laduree (Laduree pastry and salon de the, rue Royale in Paris) had the idea to fill them with a “chocolate panache” and to stick them together.  Ta da.

(Eventually you will need to preheat your oven to 150oC, but I wouldn’t do that first thing. After everything is mixed and you’ve piped them onto the cookie sheets is a good time to start your oven preheating.)

Sift ground almonds and icing sugar.  You want a really fine powder mixture to create a smooth and pretty top to your macaron.

Beat egg whites until foamy, then add salt, cream of tartar and caster sugar for 8-10 mins. NOTE: eggwhites should be room temp.

Whip until they form a peak that stands upright.  Then add the food colouring. Colour does fade as it cooks, so do a shade or two darker than you want them to be.

Transfer mixture to a pastry bag pipe out 1 inch rounds on a baking sheet lined with parchment paper.

Once you’ve filled your cookie sheet, rap the pan on the countertop hard at least 2-3 times to release the air bubbles. This will prevent the tops of your macarons from cracking.  Let them sit out for 20 mins, or up to an hour if you want. This will allow them time to dry out a bit before hitting the hot oven. They should be “tacky” to the touch, but not stick to your fingertips. This is when I preheat my oven.

Only put one tray of macarons in the oven at a time.  This will ensure that each tray gets in the ideal spot of the oven.  The macarons sitting out waiting for the oven won’t mind, as they’re supposed to sit out for a while anyway.  Bake for 20 mins.  If they stick to the tray, they’re not done.  They should slide right off the parchment paper.  If they’re still sticking to the paper after 20 minutes, add 5-7 minutes to the cook time and see how they’re doing then.

While you’re baking all your macarons, you can make the filling

Add your raspberry to the buttercream, and whip until combined.

Take one of the baked cookies and pipe a small mound of buttercream onto the flat side, then grab another one and slightly squish the butter cream between the two. 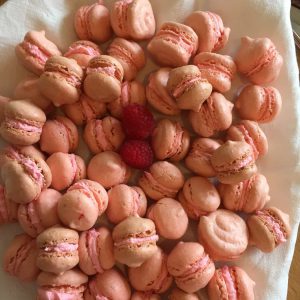 If not eating within 12 hours, put them in the fridge.

Don't feel like cooking or baking? Visit our shop or email me at info@jenskitchen.ie.

View Shop
We use cookies to ensure that we give you the best experience on our website. If you continue to use this site we will assume that you are happy with it.Ok